Eagle Mistakes Bald Head for a Rock: The Bizarre Circumstances Surrounding the Death of Aeschylus

Aeschylus, widely regarded as the “Father of Tragedy,” was one of the first of classical Athens’ great dramatists. He raised the emerging art of tragedy to new heights of poetry and theatrical power. The legendary playwright wrote more than 90 plays and won with half of them at Athenian festivals of Greek drama. For all his skills in theater, however, he’s trending within the circles of modern pop culture thanks to his very bizarre death. His murderers were two animals!

After the creation of his Orestean trilogy, probably the best of his works, he became very unpopular with people. This was due to the fact that in the Eumenides, the last of the three plays, he openly expressed his aristocratic tendencies and roots, something that the majority of the Athenians didn’t appreciate.  Disappointed from the hostile reaction of his compatriots, he decided to leave for Sicily; where he met one of the most ironic and bizarre deaths in history. Aeschylus’ death is the only documented case of human death directly attributed to a tortoise.

Apparently, Aeschylus became a victim due to his bald head. According to some historical sources, Aeschylus met his tragic death when a hungry eagle dropped a tortoise on his head – so the shell could break, and the eagle could have access to the meat – apparently mistaking the playwright’s bald head for a rock. Ironically, Roman author and philosopher Pliny notes in his Naturalis Historia that Aeschylus had been staying outdoors to avoid a prophecy that he would be killed by a falling object. 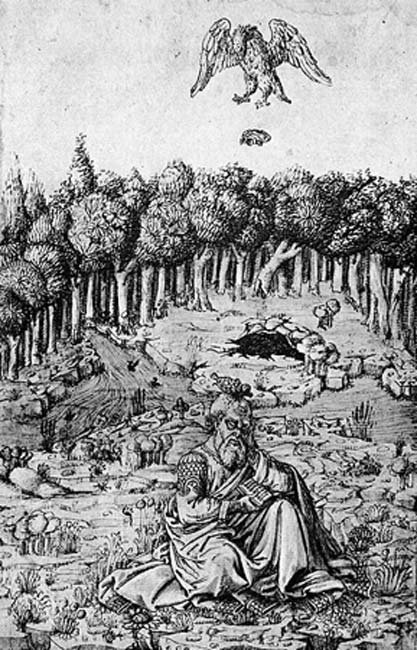 Illustration of the death of Aeschylus in the 15th century Florentine Picture Chronicle by Maso Finiguerra. (Public Domain)

Regardless of the way he died though, Aeschylus should be remembered for all the right reasons, such as being the man who laid the foundations for all the dramatic arts that followed. His unquestionable influence throughout the centuries was best demonstrated when Senator Robert F. Kennedy quoted the Edith Hamilton translation of Aeschylus on the night of the assassination of Martin Luther King Jr.

After Kennedy was notified that King was murdered right before a campaign stop in Indianapolis, he was the first to publicly inform the audience of King's assassination, causing members of the audience to scream and wail in disbelief. Kennedy started his historic speech by quoting the legendary Greek playwright in order to express his feelings of grief and pain, "Even in our sleep, pain which cannot forget falls drop by drop upon the heart until, in our own despair, against our will, comes wisdom through the awful grace of God."