Kombucha – The Legendary Drink of Immortality

Kombucha is a type of fermented tea which originated hundreds of years ago but has only recently become a global phenomenon. It is difficult to confirm exactly where kombucha first became popular, and there is much debate surrounding the question. Most people cite China as the probable homeland, possibly around 200 AD, although it’s believed to have gained its name from a Japanese doctor who lived around 400 AD.

Stories say that Dr. Kombu presented the drink to Japanese Emperor Inyoko and both enjoyed it and noted its health benefits. As a result, the tea became popular throughout Japan, and it earned its name from Dr. Kombu, with the suffix “cha” (the Japanese word for tea) tagged on to the end. The tea became popular among the Samurai, who would drink it to increase their strength and energy before a battle.

It is likely kombucha was introduced to Russia at the end of the 19th Century when soldiers from China, Japan, Korea, and Russia were involved in territorial conflicts and mixed some cultural practices. By the 1900s, kombucha was being brewed over a wide area, including much of Russia, and it was being used by many as a folk remedy.

Kombucha spread further into Europe during WWI when a German scientist, Dr. Rudolf Sklenar, witnessed Russian peasants using kombucha to aid wounded soldiers. He was intrigued by kombucha and its potential use as a treatment. After bringing it back to Germany he used kombucha in his treatment of cancer patients.

Both Russia and Germany continued to use kombucha as a medicine throughout the early 20th Century, and a huge number of studies were conducted in an attempt to understand and verify the benefits of the drink – many of these studies were focused on how kombucha could help with digestive problems and in managing diabetes.

During WWII, when both tea and sugar were heavily rationed, the trend for kombucha died down. But more health fads brought it back to light. The hippies of the 1960s were some of the first to catch on to the idea in North America.

This resurgence in popularity was given a further boost when Swiss scientists presented research confirming some of the health benefits of drinking kombucha. Since 2007, at least seven studies have confirmed that drinking kombucha can help to combat the effects of mild exposure to radiation. It has also become popular with people going through chemotherapy as it has helped some people with the side effects of treatment.

What makes kombucha so unique is the fact it is fermented with a pancake-like disk of yeast known as SCOBY (Symbiotic Culture of Bacteria and Yeast). Kombucha is only mildly alcoholic; you would have to drink gallons of kombucha to ingest a comparable level to a single light beer. 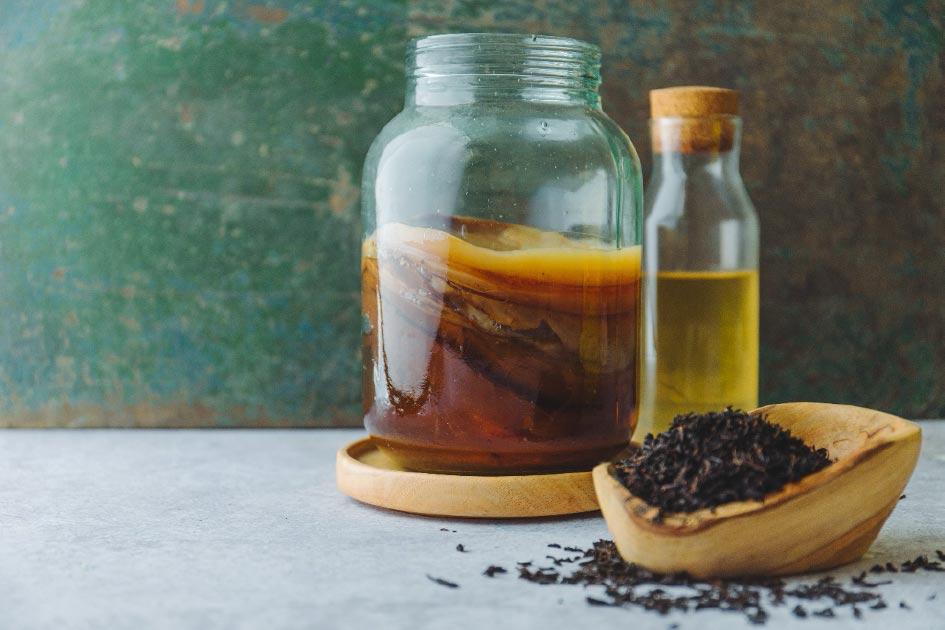 A SCOBY in a jar. (AdobeStock)

And while it isn’t actually the elixir of life or tea of immortality that our ancient ancestors claimed, it has also been shown to anecdotally benefit digestion, reduce acid reflux, reduce stress, improve skin and hair conditions, decrease colds and flus, ease arthritis pain, relieve headaches and migraines, and increase energy.