The Lady of Elche

In 1897, archaeologists uncovered a stunning artifact on a private estate at L'Alcúdia in Valencia, Spain. This find was a statue – a polychrome bust of a woman’s head. Believed to date back to the 4th Century BC, the bust features a woman wearing an elaborate headdress. Now seen as one of Spain’s most famous icons, the bust is known as the Lady of Elche.

It is said that a young boy of 14 had overturned a stone when he came across the bust. The bust shows the woman’s head, neck, and shoulders, and extends down to her chest. However, it is possible that the bust was originally part of a larger, full-body statue. 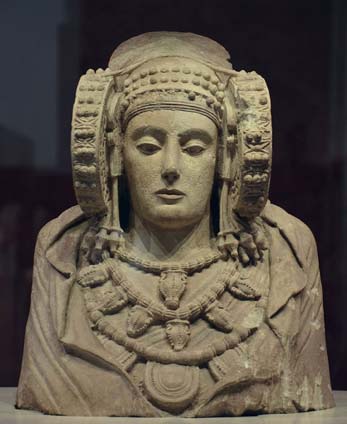 The Lady of Elche, believed to be a piece of Iberian sculpture from the 4th century BC. (Carole Raddato/CC BY SA 2.0)

The complex headdress features two large coils known as “rodetes” on either side of the head and face. These may represent ceremonial adornments, suggesting that the woman may be a priestess. The headdress runs across the forehead, with a pattern of raised marble-shaped bumps. Tassel-like pieces hang in front of the ears, and elaborate necklaces grace her chest. The woman’s face contains an expressionless gaze, and when it was found, contained traces of red, white, and blue decorative paint. The composition of the stone indicates that it was carved at L'Alcúdia.

The origin of the sculpture is puzzling and has become a matter of heated debate. Some scholars suggest that the sculpture is Iberian, although the craftsmanship also suggests Hellenistic influences. The Lady of Elche may be associated with Tanit, the goddess of Carthage, who was worshiped by the Punic-Iberians.

Top image: Jephthah’s Daughter by James Tissot, circa 1896, based on the Lady of Elche. (Public Domain)