Who Was This Mysterious Mesopotamian Goddess?

The Burney Relief is considered one of the most important works of art from the Ancient Near East but continues to be a subject of debate to this day.

The large terracotta plaque, measuring 20 by 15 inches, depicts a winged, nude, goddess-like figure with bird's talons. She is wearing a headdress with four pairs of horns topped with a disc, indicating she was a deity. Her arms are raised, and she holds a rod and ring in each hand. An owl is shown on either side of her, while a pair of lions are placed under her feet.

The plaque was modeled by hand and was painted. Although the relief has long since lost its colors, scientific analysis showed that red ochre was applied to the body of the female figure. 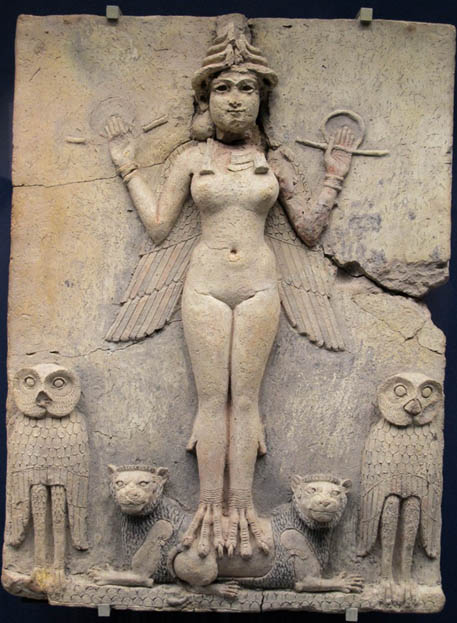 The relief was made in Mesopotamia and has been dated to around the 19th / 18th century BC, though its exact provenance is unknown.

The most intriguing aspect of the Burney Relief is undoubtedly the identity of the female figure. Initially, the figure was considered to be a representation of a demon known as Lilitu (from which the Jewish Lilith is derived). This is based on the figure’s wings, talon, and the presence of owls. But other scholars argue she was not a demon but a goddess, specifically Inanna (later equated with Ishtar), a Mesopotamian goddess regarded as the Queen of Heaven. Inanna is often associated with lions, and her ornaments are likened to those seen in other depictions of Inanna.

Others, however, have suggested that the figure is meant to represent Ereshkigal, Inanna’s older sister, and rival. While Inanna was the Queen of the Sky, Ereshkigal was the Queen of the Underworld. The identification of the figure as Ereshkigal is based on the fact that the goddesses’ wings are shown pointing downwards. If the figure was meant to represent Inanna, so the argument goes, the wings would have been spread outwards. In the myth of Inanna’s Descent to the Underworld, Inanna is forced to strip off her ornaments as she passes through her sister’s realm, and the relief may be a representation of the story’s conclusion.

While the identity of the mystery goddess or demon may never be known, crowds still flock to the British Museum to see the world-famous relief in person, while scholars debate its interpretation.