Stones, Snakes, Salt, and Slag: The Bizarre and Unexplained Phenomenon of Raining Objects

Throughout history, there have been numerous recorded instances of strange objects falling from the sky - fish, frogs, candy, jellyfish, beans, nuts, seeds, worms, spiders, and all manner of bizarre and unlikely objects. The most popular explanation is that strong winds whisk objects up from the ground or water and hurl them towards an unexpected location many miles away. But what about showers of heavy stones that have been known to damage houses and even kill people and livestock?

A Long History of Raining Objects

One of the first recorded instances of ‘raining’ objects comes from the writings of the first-century Roman philosopher and naturalist, Pliny the Elder, who documented storms of amphibians and fish in what is now Italy. Then in the third century AD, ancient Greek rhetorician and grammarian Athenaeus wrote: “In Paeonia and Dardania it has, they say, before now rained frogs; and so great has been the number of these frogs that the houses and the roads have been full of them”.

Since then, numerous other unusual instances have been documented, including a storm in Italy in 1840 that deposited thousands of partially germinated Judas Tree seeds native to Central Africa; a dusting of sugar crystals in 1857 in Lake County, California; a rain of hazelnuts over Dublin, Ireland in 1867; flakes of beef over Kentucky; live pond mussels in Paderborn, Germany in 1892; and jellyfish in Bath, England in 1894.

One of the first scientists to address the strange phenomena of raining objects was E.W. Gudger, an ichthyologist at the American Museum of Natural History. In the early 20th century, Gudger published a paper titled Rains of Fishes, in which he suggested four possible explanations for showers of marine species: Firstly, he suggested that certain ‘out-of-place’ animal species may simply be on their migration. Secondly, that fish or other marine species were left stranded on land after an overflow from ponds or streams. Thirdly, that estivating fish, awakened by heavy rains, had burrowed to the surface. And fourthly, that the fish had been whisked out of the ocean or lake by waterspouts or tornadoes and dumped to the ground many miles away.

Some occurrences of falling objects also cannot be as easily explained by this theory. The phenomena of raining stones, for example, has been known to last for several days or even weeks, and with rocks too large to be carried long distances in the wind. In Medieval times, such bizarre phenomena were attributed to goblins, brownies, or stone-throwing demons.

Scientists have admitted that they really do not have a definitive answer to the strange phenomena of raining stones. Over the years, many theories have been proposed ranging from poltergeist activity to supernatural beings, gangs of stone-throwers, volcanoes, meteorites, tornadoes, and even divine retribution. 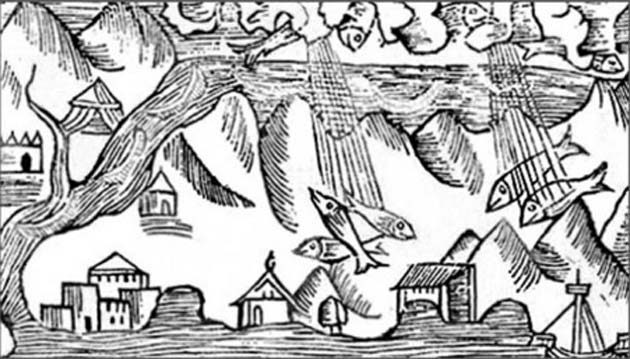 Some experts have argued that raining stones may be caused by a meteorite entering Earth’s atmosphere and fragmenting into thousands of smaller stones. However, such an event is usually accompanied by a sonic boom, which has not been documented in any of the reported cases, and this theory would have a hard time accounting for events that have lasted days or even weeks.

As with many unusual and unexplained phenomena, scientists and academics have been reluctant to examine the subject in any rigorous manner. We are left with mere speculations as to what causes this bizarre phenomenon and we may be advised to carry umbrellas to ward off these unexpected ‘gifts’ of the gods!