What Could Your Urine Tell a Medieval Doctor?

In modern medicine, urine samples are routinely examined in laboratories to obtain clinical information about a patient. This procedure, known as urinalysis, developed from an ancient medical process called uroscopy. Although mostly discredited today, doctors used to use a urine wheel to diagnose illnesses up until the middle of the 19th century.

While uroscopy may be traced back to the ancient Greek and Roman periods, it was only during the Middle Ages that it became a significant method of medical examination. Urology was greatly aided during this period by the development of the urine wheel. In essence, this was a chart (in the form of a wheel) which helped the medieval physician in his diagnosis of a patient’s illness. 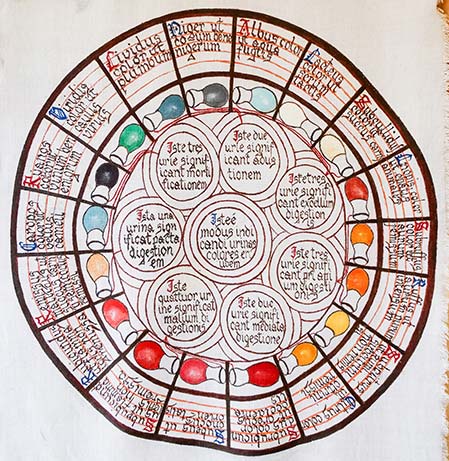 The urine wheel is divided into 20 different parts, each of which shows a different color of urine. In addition to observing the urine, it may be assumed that the physicians of the Middle Ages also relied on their sense of taste and smell, as the taste and smell of a patient’s urine were affected by the illness they were suffering from, and generally corresponded with specific colors.

The 17th century English physician Thomas Willis noted that the urine of a diabetic patient tasted “wonderfully sweet as if it were imbued with honey or sugar.” It was Willis who coined the term ‘mellitus’ (meaning ‘sweetened with honey’) in diabetes mellitus, and this disorder was once known as ‘Willis’s disease’.

The urine of King George III of Great Britain is reported to have been purple in color, and it may have been a sign that he was suffering from porphyria, a group of diseases that negatively affects the nervous system. It has been speculated that this could have caused the madness that the king was infamous for.

Uroscopy and the urine wheel continued to be used up by European physicians to diagnose their patients up until the middle of the 19th century. Towards the end of the 19th century, chemical analysis began to be used for the examination of urine. In consequence, uroscopy and the urine wheel fell out of favor, and doctors no longer needed to taste their patients’ urine!