The Astronomical Temples of Loughcrew

It is probably not possible to tell when humans first began to wonder about the stars, the sun, and the moon or tried to understand their motion, though there is evidence of a lunar calendar being used by hunter-gatherers during the Upper Paleolithic in Europe around 32,000 BC. In Ireland, one of the oldest astronomically significant sites is the Loughcrew cairn complex in County Meath, and it is in March and September each year that its magnificence really shines.

Scattered around the Slieve na Caillaigh hills at Loughcrew are at least 32 cairns – mounds of stones built as a memorial, tomb or landmark – that were built to be aligned with the motion of the sun throughout the year. In particular, they mark the cardinal directions, the equinoxes, when daytime and nighttime are of approximately equal duration all over the planet, and cross-quarter days, the days mid-way between an equinox and solstice.

While the ancient monument of Newgrange is world famous for the illumination of its passage and chamber at the winter solstice sunrise, the lighting up of the backstone in Cairn T at Loughcrew on the spring and autumnal equinoxes is less well known but equally significant.

Archaeologists believe that the Loughcrew cairns mark the sites where prominent people, such as priests or chieftains, were buried. However, the Loughcrew cairns were more than just tombs. They were also ritual monuments and temples where people gathered to celebrate their ancestors, gods, and nature.

Cairn T Lights Up at the Equinoxes

Of the 32 recorded cairns at Loughcrew, one is known as Carnbane East, which contains another significant tomb known as Cairn T. There is one large kerbstone located on the north side of the cairn with armrests or “horns”, which is called the Hag’s Chair. According to local folklore, it is the seat upon which the mythical hag sat to watch the stars. 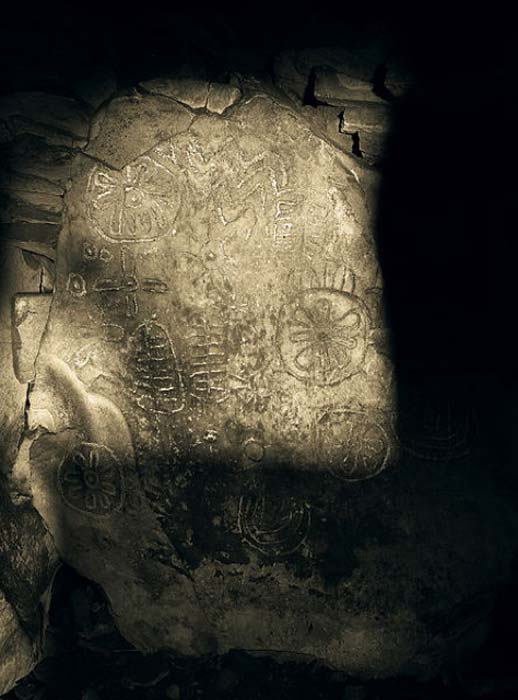 Cairn T at Loughcrew is aligned to the rising sun at the equinoxes. (CC BY SA 4.0)

Cairn T is decorated with engravings, many of which resemble flowers and combs. On the spring and autumnal equinoxes, a rectangular beam of sunlight illuminates the engraved stone recessed into the western wall of the chamber. As the sun rises, it moves off to the right. The symbols on the stone may be related to marking the exact time of the equinox, though without written records we cannot be sure.

The March equinox is the halfway point between the summer and winter solstices. At Loughcrew, the spring equinox experience can be witnessed for three days, when the backstone in Cairn T is lit up by the morning sunlight shining down the passageway. Since the distant past, the ancient burial grounds of Loughcrew have been a location where people have celebrated this celestial event. Today, people still flock to the site on the equinoxes to witness the breathtaking view of the beam of sunlight shining down the dark tomb, marking the passage of time and connecting them with the traditions of their ancestors.