The Ancient Roots of Doomsday Prophecies

Doomsday prophecies are as old as recorded time.  For as long as humans have existed, there has been a fear of an apocalypse or ‘end of times’, when the gods wish vengeance upon their people, when humans pay for the sins of their forefathers, and when the demons of the world rise up and devour all that is good.  Prophecies of the end of times stem from the mythologies of civilizations past: the Norse story of Ragnarök, the tale of Noah and the Flood, and the Biblical apocalypse.

The earliest known prediction of the end of the world came from the Assyrians, a powerful Mesopotamian culture that lasted for roughly two thousand years.  A tablet was found dating back to sometime between 2800 and 2500 BC that bears the first known prophecy of the end of days.  According to the translation, it claims that the earth was in its final days in those years and that the world was slowly deteriorating into a corrupt society that would only end with its destruction.  Though it is not known who wrote this inscription, and where specifically the tablet came from, it is a fervent example of how far back in human history apocalyptic prophecies began.

In Norse mythology, Ragnarök is a series of apocalyptic events that will define the end of the world, where giants of frost and fire will together fight the gods in a final battle that will ultimately destroy the planet, submerging it underwater. According to the legend, the world will resurface, the surviving and returning gods will meet, and the world will be repopulated by two human survivors. 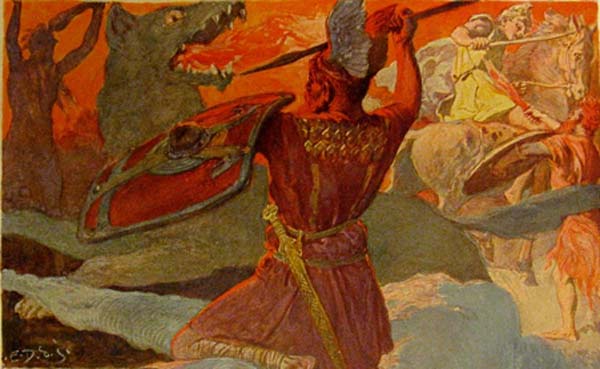 Odin und Fenriswolf Freyr und Surt. A scene from Ragnarök, the final battle between Odin and Fenrir and Freyr and Surtr.Circa 1905 (Public Domain)

Numerous other prophecies have appeared throughout history pertaining explicitly to the mortal fear of the ‘Second Coming of Christ’ —the belief that a day will come when humankind would be judged for all of their sins, and Christ would battle the Anti-Christ, Satan, and a False Prophet in the biblical Armageddon. The Four Horsemen, traditionally named War, Famine, Pestilence, and Death, will ride during the Apocalypse. Most, if not all, prophets claimed that preceding the enormous battle would be the Rapture, where the purest of humankind would be removed from the Earth before the battle between Christ and the Anti-Christ.

New millennia, years ending in '99, and the beginning of new centuries have all been subject to doomsday prophecies in the past, and the present era is no exception to that.  Uncertainties about the future continue to plague the human race, such as the recent belief that cataclysmic events would transpire on or around 21 December 2012, a date regarded as the end-date of a 5,126year-long cycle in the Mesoamerican Long Count calendar.

Despite the advancement of the human race, and the technological tracking abilities at their disposal, new and unknown events and situation remain terrifying, leading many people around the world, known as ‘Doomsday Preppers,’ to continue preparing for the ‘end of the world as we know it’, seeing such efforts as a more ideal option than risking being blindsided.

It is safe to say that as long as life on earth continues to grow and thrive and even encounter devastating calamities, doomsday prophecies will continue to prevail.